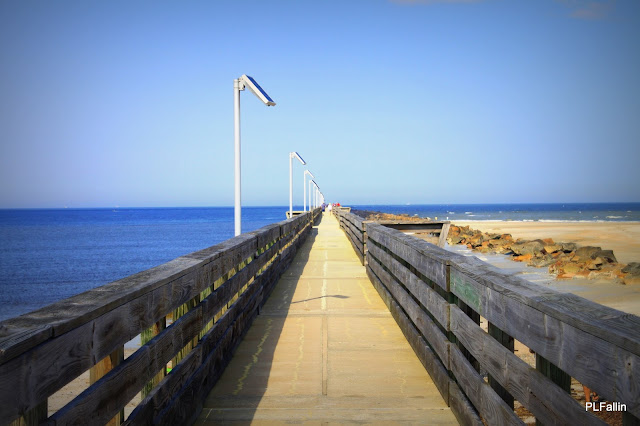 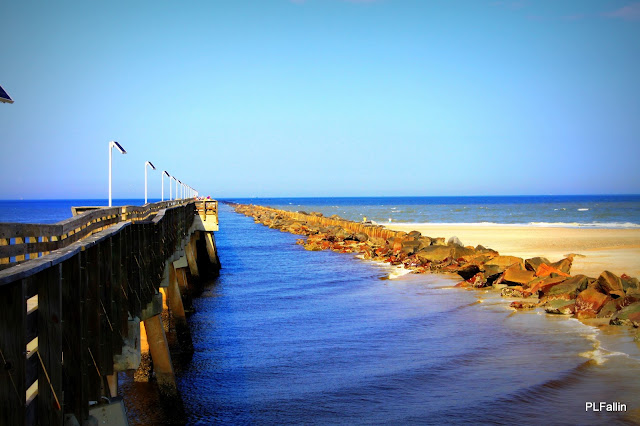 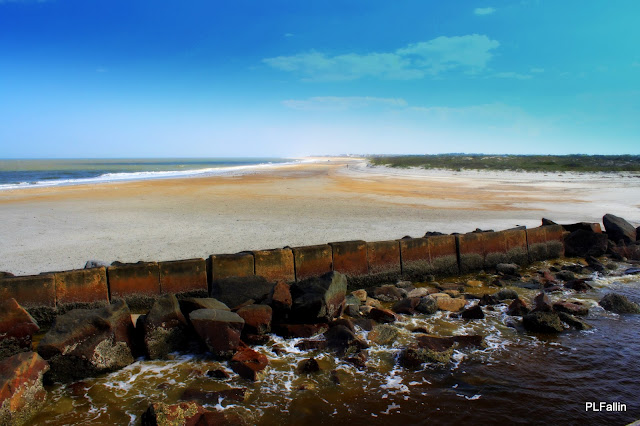 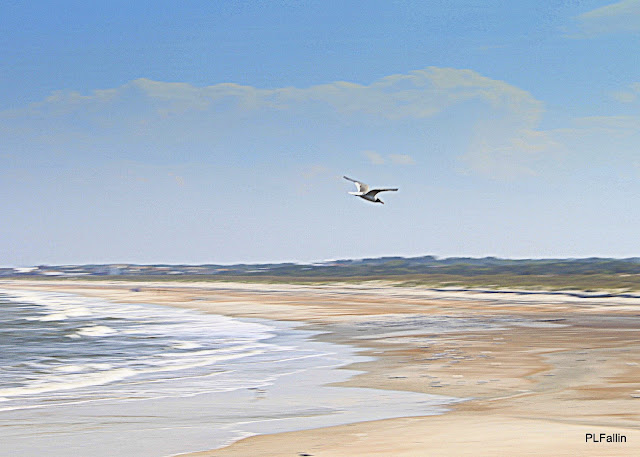 At Cumberland Sound the beach was covered with seabirds and their nests.  The sky, ocean and beach was painted in watercolor shades of blue and beige.  The fishing pier was the longest pier I have ever walked.  A family of Dolphins were swimming close to the bridge diving in and out of the water.  This is a place I plan to return, time and time again.  It was breath taking seeing so much sea life in one place.
To A Sea Bird (Santa Cruz 1869)﻿
Sauntering hither on listless wings,
Careless vagabond of the sea,
Little thou heedest the surf that sings,
The bar that thunders, the shale that rings,-
Give me to keep thy company.

Little thou hast, old friend, that 's new;
Storms and wrecks are old things to thee;
Sick am I of these changes, too;
Little to care for, little to rue,-
I on the shore, and thou on the sea.

All of thy wanderings, far and near,
Bring thee at last to shore and me;
All of my journeyings end them here:
This our tether must be our cheer,-
I on the shore, and thou on the sea.

Lazily rocking on ocean's breast,
Something in common, old friend, have we:
Thou on the shingle seek'st thy nest,
I to the waters look for rest,-
I on the shore, and thou on the sea.

Francis Bret Harte (August 25, 1837 - May 6, 1902) was an American author and poet, who worked in a number of different professional capacities including miner, teacher, messenger and journalist before turning to full time writing in 1871. Bret Harte moved to California in 1853 and spent part of his life in a mining camp near Humboldt Bay (the current town of Arcata), a setting which provided material for some of his works. While The Luck of Roaring Camp (published in 1968) made Bret Harte famous nationwide and helped him to land a writing contract with a publisher in 1871, he faltered and was without a contract by 1872. In 1878 Bret Harte was appointed as United States Consul in Krefeld, Germany and then to Glasgow in 1880. He spent thirty years in Europe, moving to London in 1885. He died in England of throat cancer in 1902. Bret Harte's literary output improved while he was in Europe and helped to revive his popularity. The Outcasts of Poker Flat and Tennessee's Partner join The Luck of Roaring Camp on the list of his influential works.