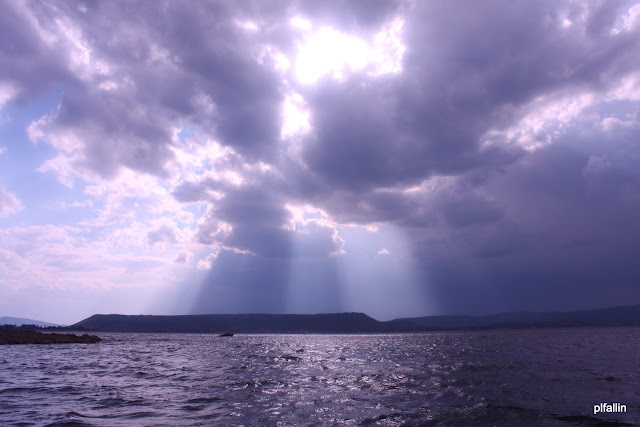 “The Legend of Grand Lake”
by Judge Joseph L. Wescott
“To yonder rugged mountain side
With rapid pace I quickly hied,
Upon a beetling rock I stood,
Gazing upon the angry flood.
Between dark clouds the moon shone out,
Throwing its silvery light about.
The wind still blew with a sullen roar,
The angry waves still lashed the shore.
Far, far away I soon espied
The raft upon the angry tide,
Each moment some high angry wave,
Carried a victim to the grave,
I saw a giant wave arise,
Whose chest towered toward the skies,
Went thundering on upon its way
Like angry wolves in search of prey.
And nearer, still nearer it came,
In pursuit of its human game.
The doomed ones saw that their hour was nigh
And in the deep they soon must lie.
The wave came down with a thundering sound
A cloud of spray was strewn around.
I heard a wail of fell despair,
Borne on upon the midnight air
Ah! what a sight now met my view-
The raft that bore that precious crew,
Was scattered in fragments far and wide-
Tossing upon the angry tide.
O’erwhelmed with sorrow, grief and woe-
To leave this world I long to go,
To join my friends in a land afar,
In their bright homes, some twinkling star!
But the Great Spirit wills it so
That I must tarry here below
To be a scourge to all our foes.”

“To this day the lake is considered “bad medicine” by the Ute Indians. As the legend goes, when the lake has frozen over for the winter, one can still hear the urgent cries of the women and children beneath the ice.
Posted by plfallin at 10:42 PM