Rock Stand, A Tale of an Old Mule 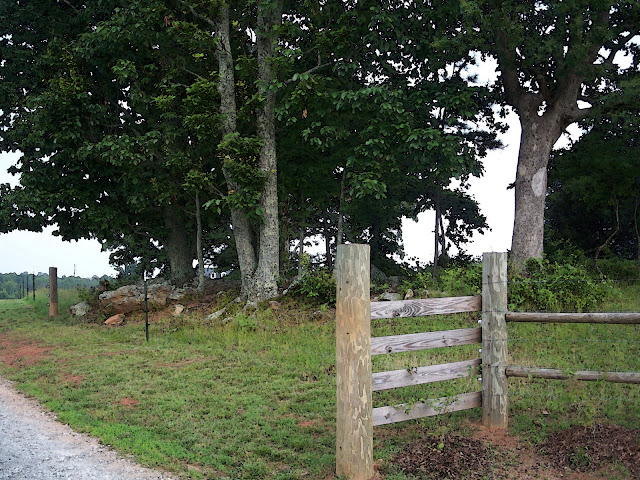 My husband was born in the Rock Stand community which is just north of Roanoke, Alabama on Highway 431. Here is a story he told me about this picture.  You, like I, may choose to question the accuracy of his memory, but here goes...The old barn where the one Jersey cow sought refuge from the cold on rainy wintry nights stood near this site. The old barn became the home of a long-eared mule named Jefferson. The door to his stable was designed for a cow so his ears always scraped the top of the opening when he entered or made his exit. Pretty soon, he wore all the hide off his ears and Papa knew he had to do something about that. With the help of a neighbor, Robert Ramsey, they set out to correct the problem. Robert had a long measuring tape that he used to measure the length and girth of his prize hog. He measured her daily and would often flag down a passer-by to give a personal demonstration of just how much larger was that hog this week than last. He got the mule's measurement with that tape in a standing position with ears erect and suggested that the barn needed to be raised just over 18" in order to get the top of the door off the mule's ears. They borrowed four hydraulic jacks from nearby garages and set out to raise the barn one corner at a time. It was during this process that a couple of smart ass Yankees drove by and noticed what was taking place. When they asked the reason for raising the barn, they were told the story of the sore-eared mule. One of the Northern guys commented, "Why don't you just take a shovel and make the entry eighteen inches deeper?" When they drove away, I remember old Robert turning to my Papa and saying, "Now ain't that just like a couple of dumb-ass Yankees! It ain't Jefferson's legs that is too long, it's his ears!" The rocks in the foreground gave the community its name for it was here that the Indians supposedly stood during deer hunts. Rock Stand was an Indian deer stand.
Posted by plfallin at 2:48 PM